There will be any workshop/training about the Ruby?

BTW, Is there an interest from your side to announce the new learning group at our Rails Girls Hackday on 6th Dec 2014, too?

I’ll be there as a coach, so I can definitely do a quick lightning talk on this.

So, @inthuytion, @kiyu_mars, @netznarkose and I met before the Ruby User group and have decided the following:

We also announced this at Rug::B and got immediately tweeted.

There is a bit of worry on the side of RailsGirls study groups, as we’re colliding on the monday evening slot with the RubyMonsters. However, we’d have that collision with one of the many groups every single day of the week, and I think we actually do have slightly different audiences: We don’t require commitment to a group (come if you want!) and don’t organise projects for groups to work on (“self-directed” and all, yaar).

Here are the additions from my notes (please correct me, if i am wrong):

Thanks @inthuytion, indeed I put the wrong house number. edited so there’s no confusion.

You are granted co-organiser rights on the group – which means you can also promote other. Enjoy!

@inthuytion, @netznarkose, @kiyu_mars could y’all please send me url’s to your meetup profile? Then I can grant you rights to edit the events.

@ mamhoff
good job at the rug:b meeting a nice and eloquent little presentation.

@ all yes, a preperation and “get to know each other better” meeting would be great
i am untill the 23th of dec in berlin.

what about another meeting next week before christmas is sucking away our productivity? apart from tuesday every day of the coming week is fine for me…

Let’s meet on Wednesday 17th, 19:00, at the Fairnopoly office. That way we can go to the OTS Winter party lateron.

cool, i will be there

Wish I could be there, but out of the country until New Year’s.

Strange, I have not been notified by email that new messages had arrived, so sorry for my delayed reply.
@mamhoff I will be there on the 17th at Fairnopoly. Thanks for organizing th space.

Hey guys, remeber to join us after your meetup for the OTS Christmas Party. 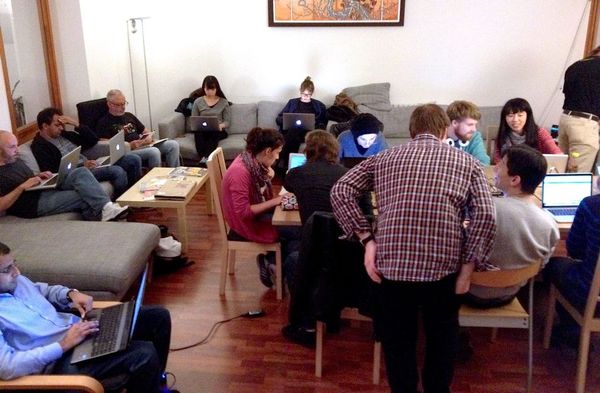 Wed, Dec 17, 2014, 8:30 PM: Christmas is almost here and we want to celebrate with our biggest family: The whole OpenTechSchool community!!OTS will join the co-up winter party this Wednesday 17th, so

Looking forward to celebrate with you all
Gio

ruby co-learning will take place in a conference room at fairmondo starting january 2015.
all admins know now how to get there kiyu_mars has a key so there shouldn’t be any problems to get in.
at the beginning of every meeting we have a short round of introductions. we ask the participants to act respectful to all patrons (berlin code of conduct) and to our host (equipment, etc.)

Hey everybody, here’s the event for Ruby Co-Learning. It repeats every monday! I used a large part of the invitation text from the Front-end Co-learning group because it works really well for them (I hope that’s ok @xMartin, @bastianalbers, @anaketa).

Mon, Jan 5, 2015, 7:00 PM: The meet-up is all about Ruby and Rails (but also about all the other things you can do with Ruby).We are a friendly group that meets every Monday at seven o'clock to learn

@netznarkose can you apply to be member of the OTS Berlin meet-up group? Otherwise I can’t make you an organizer, it turns out.

@netznarkose can you apply to be member of the OTS Berlin meet-up group? Otherwise I can’t make you an organizer, it turns out.

now it should work

You’re now all coordinators. And: The first session is already almost booked out! Whoah!

Hi, today I am getting permanently notifications from meetup about people joining the Ruby Co-Learning (14 times until now). Then I found out that there are 2 Ruby Co-Learning events with different attendees in the calendar timeline. Do you know why? Is it a bug?